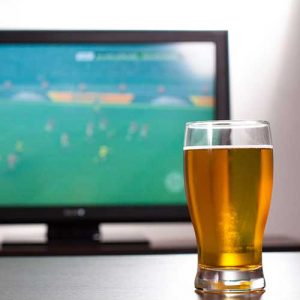 Thanks to our Guest Blogger and beer aficionado… In this week’s article Denis, “the man” Cooper writes about the Tournament Tasters you need when you settle down to watch Rugby World Cup 2019! We have plenty to choose from at Fresh Choice Nelson.

Woo hoo! Rugby World Cup 2019 has officially kicked off! Here’s my prediction. The All Blacks will win the tournament. The only way anybody else is going to get their hands on the cup is when they are engraving it All Blacks!

Did you know that the same whistle has been blown for the opening game of every Rugby World Cup tournament? It was first used in 1905 during a game between England and New Zealand. Whew, must be some saliva built up after all those years!

Check out this RWC (really wonderful craft) beers to build up your saliva while watching Rugby World Cup 2019.

The brewery with the most totally apt name for the ABs in an RWC is Sprig & Fern. They have the Game Changer. It’s a 6.7% strong pale ale and is a brew of two halves. One half is hoppy as hell, and the other is equally strong with malts. Grapefruity hops come forward one moment and then – in a flash – biscuity malts will dominate. It’s up to your taste buds to decide the game-changer.

You can’t have rugby and not get Dirty Boots. Dirty Boots from Garage Project is a big, bold, hop-forward American Pale Ale that will push your taste buds to their limit. Lots of resinous pine and grapefruit flavours dominating… It’s hard to put them down.

The All Blacks have the velvet boot of Beauden Barrett. Or should that be Blueden Barrett, now that he’s with the Blues? Kereru Brewing also has a velvet boot, in the form of an 8% strong Belgian Ale. Velvet describes the smoothness, while the boot is an accurate indication of the power!

Sprint down to Fresh Choice Nelson and ruck out something different to try for Rugby World Cup 2019.