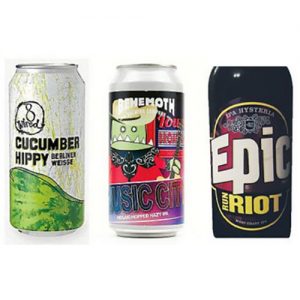 Thanks to our Guest Blogger and beer aficionado… In this week’s article Denis “the man” Cooper writes about some new beers that have just landed on the shelves at Fresh Choice Nelson.

Beervana hit Wellington last weekend for the annual celebration of great beer and brewing. It was the ultimate beer tasting experience with over 347 delicious craft beers to try. You’d think that this amount of thirst-quenching choices would be more than enough, but hold the line folks… Fresh Choice Nelson has three more just released new beers to tempt your tasting tongue.

First off is Behemoth with Music City, a demonstration of yet another IPA style called Hazy IPA. Similar to Black, Brown, Red, White and Sour IPAs. The Hazy style is still very hop forward. But, being brewed with a combination of wheat and oats, gives the beer not only a haze but also a luscious, juicy mouth feel. Add to this a very relaxed bitterness and the style is a lot like drinking pure orange and pineapple fruit juice, and Music City sits very well in this genre. An extremely easy drinking 6.3 % and for those drinkers who have given up on the ever-increasing tongue buckling bitterness of IPAs, you can now rejoice in the haze.

Next on the list of new beers at Fresh Choice Nelson comes 8 Wired Cucumber Hippy 4% Berliner Weisse. A Berliner Weisse is a four-centuries-old beer style from Germany made from a combination of malted barley and wheat, with the distinguishing flavour of sourness. The 8 Wired version delivers a pilsner-like crisp, clean refreshment with just the right amount of mouth puckering sourness, and finishes with hoppy cucumber notes.

Last of the new beers on offer at Fresh Choice Nelson is from that prolific brewer of IPAs, Epic. They’ve produced another in their Hysteria series of IPAs (named after songs from the Def Leppard album, Hysteria) called Run Riot. This beer is a tweaked version of the most awarded IPA in New Zealand, Epic’s Armageddon. Run Riot may very well be even better. If you like Armageddon then try a taste off with Run Riot and let your tastebuds run riot.

Rip on down to FreshChoice this Friday between 3:00 pm and 6:00 pm for a mini Beervana and an opportunity to try some new beers.