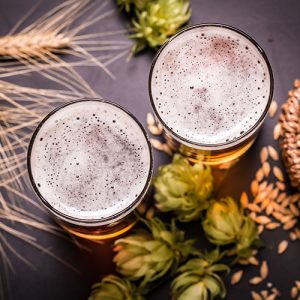 Thanks to our Guest Blogger and beer aficionado… In this week’s article Denis “the man” Cooper writes about the first Uniquely Nelson Street Hop.

The first Uniquely Nelson Street Hop will be held this Sunday 28th October. This event is not about Royce da 5’9″, the rapper’s rapper, or his fourth album “Street Hop” (2009). But rather it’s about raising awareness and funds for the Nelson Hospice project. The event will take place in Hardy Street, Collingwood Street, Trafalgar Street area. There will be classic cars, live bands, dancing groups and roller skaters, with free popcorn and loads of family entertainment.

Also featuring at the Nelson Street Hop, on Collingwood Street, is Fresh Choice… With a different spin on the hop theme. Instead of street hop, they’ve got beer hop, and why not? It is Hoptober after all!

The Fresh Choice Nelson beer hop features two new hoppy brews, and one of the biggest hop rockets ever invented.

The first new hoppy brew is Hoppy trails from 8 Wired Brewing, and in keeping with the fund-raising theme, 8 Wired are donating $1 per litre sold to Trail Fund NZ. A non-profit organisation who support the development and maintenance of public mountain bike tracks in NZ. The beer is also a jolly good drop to boot, exuding big tropical fruit and citrus notes and finishing crisp and clean. A thirst-quenching hoppy pale ale and at 5% ABV this is a ripper all-day IPA.

The next hoppy brew from the Fresh Choice fridge is Hoptical Illusion by Liberty Brewing. This is serious, hop-forward Double IPA with the illusion of looking like a mild lager. The 8% ABV is also deceptive, as it’s sooo easy to drink you’d think the alcohol to be way less. Whatever, the mystery, she’s sheer indulgent hopulence.

The biggest of all hopsters and one of the first Double IPAs that ever roamed the craft beer streets is Epic’s Hop Zombie. It oozes and bleeds massive amounts of oily passionfruit and mango flavours, without any over-the-top bitterness. Very hopilicious but be careful, this monster is 8.5 % and could bite.

When you’re done hoppin’ the Nelson Street Hop, hop on down to Fresh Choice Nelson and rap some fresh, choice, hop-forward beersies down ya!