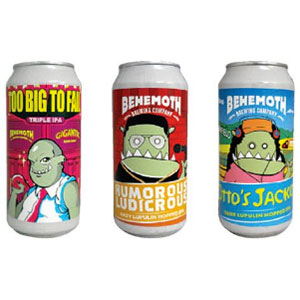 Thanks to our Guest Blogger and beer aficionado… In this week’s article Denis “the man” Cooper writes about Behemoth Brewing IPA, which you can discover on the shelves at Fresh Choice Nelson.

You know it’s cold outside when you go outside, and it’s cold! Winter is sure crackin’ a cold one, so why not crack a cold one yourself? Fresh Choice Nelson has just the thing to keep you warm and cosy… And that’s Otto’s Jacket from Behemoth Brewing.

Andrew Childs is the owner of Behemoth Brewing and named it not because he’s six foot five, (also the name of one of his beers), but more because the brewery was so small when he began. He’s light-hearted when it comes to labelling his cans, but dang serious when it comes to producing prodigiously flavoured beers. Andrew is the king of colossal and his big hop flavours result in big alcohol beers… It’s the nature of the beast.

Anyhow, back to the jacket…

Otto’s Jacket is a dank, lupulin hopped IPA and is one of three Behemoth brews released recently. Dank is a reference to smelling like cannabis, (which hops are related to), and, curiously, Andrew has been known to brew in collaboration with Gigantic Brewery from the marijuana-legal state of Oregon. So maybe there is something dank in this beer… Just sayin’!

Next up is Humorous Ludicrous, a hazy lupulin hopped IPA. It’s an amusing little number, with enough hop flavours to tickle not only your taste buds but also your funny bone. Melons, grapefruit and pineapple flavours dominate with a relaxed bitterness. Making this an easy drinking seven per center!

Third of the newbies is Too Big To Fail Triple IPA. If you think an IPA is ohl, and a double IPA is ooohll, then a triple IPA is ooooh la la! At 10.6 % it’s so strong it takes three men to blow the head off it! Piney aromas with huge sticky pine resin and grape flavours predominate. It’s almost like hop cones have been whizzed in a blender to make a hop smoothie.

All Behemoth beers are bigger than big but don’t take my word for it… Schmooze on down to Fresh Choice Nelson between 3:00 p.m. and 6:00 p.m. on Friday and try a taste for yourself… See you there!