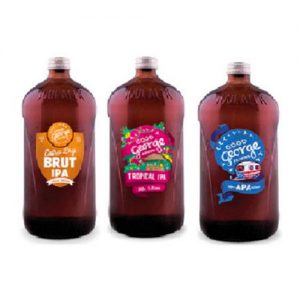 Thanks to our Guest Blogger and beer aficionado… In this week’s article Denis “the man” Cooper writes about ‘Good George Brewing’ beers, that you can find on the shelves at Fresh Choice Nelson.

Easter is beering down on us quickly. It’s a time of guilt-free chocolate and that crazy day called Good Friday, when nothing is open…. This is supposed to be good?! Thankfully, there is one thing that will make your Good Friday good, and that’s Good George Brewing.

Good George is named after the place where the brewing actually occurs; in the former St George church in Frankton. Yes, they are still keeping the tradition of making miracles.

Good George is obsessed with fresh tasting beers and has a custom beer bottle, made for purpose, called a ‘squealer’. It’s designed to lock in the aromas and flavours, so, it tastes exactly like it does when it leaves the fermenter. It’s like the brewery comes to you.

If you’re after more hops than the Easter bunny after a coffee, try these IPAs from Good George.

The Brut IPA is another style of IPA crafted from the craft brewers’ breweries. Not because it’s a big, strong, over-the-top hoppy, burn your mouth with alcohol brute (but it could be), but because its character is in its drtyness. Brewed to be as dry as possible and carbonated to the point of sparkling, it’s more like the champagne of IPAs. The Good George brut has pilsner-like qualities, being crisp, clean, refreshing and tastes of crusty bread malts and grape-flavoured hops. It’s thin-bodied with satisfying bitterness and is as dry as the Nelson summer.

Good George APA has a thicker mouthfeel but softer bitterness than the Brut and tastes of orange, pineapple and pine, backed up with caramelly malts. This is a well-balanced summer sipper.

Tropical IPA carries a fruity, resinous palate with passionfruit and mango dominating. It’s purported to have mango puree in it for an uplifting fruitiness and is perfect for Nelson’s tropical summer nights.

Good George also brew a number of other styles of beer and several seasonal ciders, their latest being a unique pineapple cider.

Don’t forget to hop on down to Fresh Choice Nelson before Good Friday to make it a Good George day!