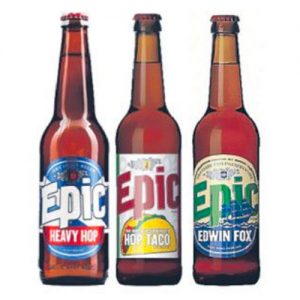 Thanks to our Guest Blogger and beer aficionado… In this week’s article Denis “the man” Cooper writes about ‘Epic’ beer that you can find on the shelves at Fresh Choice Nelson.

What an epic summer so far! You know it’s hot when the chickens start laying hard-boiled eggs, the trees are whistling for dogs and Meatloaf is singing ‘hot summer night, and the beach was burning’ in your brain.

Fortunately, Epic Brewing from Auckland has three new ales to help dampen down the hot spots.

The thing with these brewskis is that they are not Epic’s traditional bitter hop bombs, but more easy-drinking, well-balanced thirst quenchers.

First up, Epic Hop Heavy Scottish IPA. What makes it Scottish? Och, to be sure, special Scottish ale yeast of course! You’d think, as the name suggests, that it would be heavy on hopes. But, nope, this Epic Beer is an evenly spread hot-malt brew with mild hop strength and fruity flavours. The name ‘Hop Heavy’ is just a play on the Scottish beer style ‘Wee Heavy’ and at 6.3% ABV is a little bit stronger.

Epic delves into some of NZ’s early history by naming a pale ale ‘Edwin Fox’. The EF was a merchant sailing vessel operating between 1858 and 1872 and was used between England and India. Carrying pale ale earned her the nickname of the ‘Booze Barge’. Her last sailing carried immigrants to New Zealand, and she now resides, peacefully retired, in Picton Harbour as a tourist attraction.

Epic Hop Taco. I know what you’re thinking, a beer made with tacos! Well read it and weep. Epic has apparently used all the ingredients that go into making a taco, including the shells; thankfully, however, the taste is mainly orangey, peachy hop notes with a mild peppery finish.

Hats off to all the people involved with extinguishing the Tasman fires, and thanks for saving the hop farms around Wakefield and wai-iti.

When the heat is on, fire on down to the Fresh Choice Nelson fridge for some of the coolest Epic beer around!