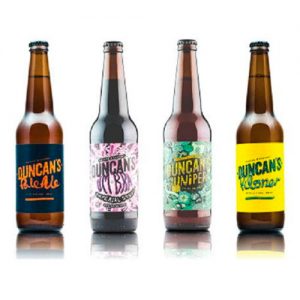 Thanks to our Guest Blogger and beer aficionado… In this week’s article Denis “the man” Cooper writes about ‘Duncan’s Brewery’ beers, that you can find on the shelves at Fresh Choice Nelson.

Oddly enough, George Duncan had an unintentional start to brewing as he never really liked beer. But, while at university, his chemistry teacher, an avid homebrewer, ignited his spark. With some mentorship from Tuatara Brewery’s founder Carl Vasta, (Tuatara is just down the road from him), Duncan went from contract brewing to building his own brewery.

Duncan’s Pale Ale was the beer that launched Duncan’s success. A beer with a fabulous, fruity aroma that tastes as it smells. It has oranges and mandarin to the forefront and just a touch of pine at the finish. This beer starred in a recent national top 30 beer competition.

Duncan’s Umbra Imperial stout is a seasonal addition and is perfect for the winter season. An umbra is the dark part of the shadow cast by the earth and is a very fitting name, as there ain’t no light shining out of this brew! It delivers the normal chocolate-coffee flavours that you’d expect from a stout. But, there are also notes from dates and prunes with the heat of an 8.5% ABV combining everything to a taste like liquid fudge.

Duncan’s Pilsner is pilsner with citrus, herbal aroma. It tastes of citrus, honey and fried rice malts. Finishing off with a soft bitterness. Very satisfying.

Duncan’s Brewery Juniper IPA has a piney aroma with a distinctive juniper gin taste that combines well with the grapefruit hops, making for a tantalising tang.

For the best beer choice, dunk on down to Fresh Choice Nelson and grab yourself something doozy from Duncan’s Brewery.