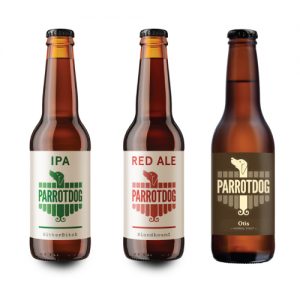 It’s the man… Denis (bitter to the core) Cooper, to give you the low down on ParrotDog, available right here at Fresh Choice Nelson.

A mat is what you put behind a door, however three Matts is what’s behind the ParrotDog brewery.

ParrotDog is the Wellington brewery founded by three Matts, Matt Kristofski, Matt Stevens and Matt Warner; with a desire to make beer that just tastes real good. No-one knows why they named it ParrotDog, but that is what it is, a brewer of astonishingly nice beers. They don’t do weird and quirky but instead concentrate on perfecting perfection.

In only five brief years after their establishment, ParrotDog grabbed 29th on Deloitte Fast 50 list in 2015. Demand for this brewer’s product has consistently outstripped supply, encouraging the three Matts to build a bigger brewery. Such is the popularity of their beers ParrotDog raise $2 million in less than 2 days on the crowdfunding site PledgeMe.

Their meteoric rise to fame is larhely due to one of their original core brews, BitterBitch. This is no angry dog, but instead a 5.8% IPA that is ferocious only in flavour, and much more elegant than the name suggests. It is bitter like an IPA should be, but it also resonates a tropical happiness, and its bitch mellowed by a rich hokey-pokey maltiness.

And for another original, sniff out the Bloodhound 6.3% Red Ale, huge on the nose with malty orange flowers, a solid bitterness and a sly rye note. Smooth rich mouth-feel and a marmalade on toast charisma, most reminiscent of strong English style ales. She’s a bit of a howler.

Try the Otis Oatmeal Stout 6.3%. Thankfully Otis wont bite as the oatmeal makes it as smooth as a baby’s bum. Notes of cocoa, coffee and a mild ashy bitterness provide a rewarding companion. It’s aseasonal brew so get while it’s cold.

ParrotDog’s latest release is a series of IPAs with a native flowering fauna theme featuring four different IPA styles that showcase how different hop cultivars can influence the flavours and bitterness of a beer. They’re pungently florally hoppy.

So for this Father’s Day, get him $2million worth of popularity, a ParrotDog from Fresh Choice in Nelson.