You are here: Home / Beer / Beers in Nelson – Gulpin’ a Sculpin 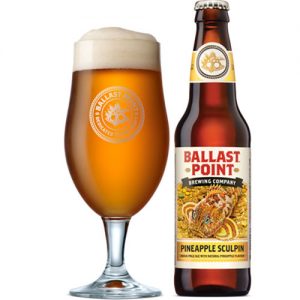 Here’s one man in Nelson that knows his beers, it’s Dynamite Denis Cooper with this week’s blog article!

IPAs are the beers that instigated the worldwide craft beer craze.

The IPA style has more hops than a Brodie Retallick goos-step. Although the line between IPA and a pale ale can be as blurry as the eyesight of a semi-final referee, IPA should be all about the hops. Not only do hops give beer bitterness, they also impart aromas and flavours – similar to walking through the Fresh Choice fruit department! It’s all these flavours that are the game changers.

At the pinnacle of IPA brewing is a group of San Diegoans who call themselves Ballast Point. They brew the hugely successful Sculpin IPA, which has become a cult craft beer. It’s the one which all other brewers try to emulate. A Sculpin is a fish with poisonous spikes on its fins that can give a strong sting. The beer is similar, full of melonicious apricots and peaches; culminating into a long, lingering bitterness.

Riding their wave of success, Ballast Point now brews a school of Sculpins.

Every Friday evening at Fresh Choice in Nelson, when we’re tasting craft beers, someone will say ‘Is that beer? I never knew a beer could taste like that!’… And chances are they’ll be sampling an IPA.

So for all you Corona cupcakes and Heineken hoons… Want some flavour? Try gulpin’ a Sculpin!