You are here: Home / Beer / A Crazy Hazy Summer with Hazy IPA 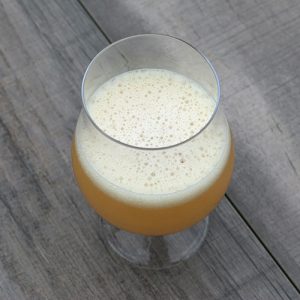 Thanks to our Guest Blogger and beer aficionado… In this week’s article Denis, “the man” Cooper writes about Hazy IPA! We have plenty of this style of beers to choose from at Fresh Choice Nelson.

In the topsy-turbid world of beer styles, yet another IPA has emerged from the brewer’s brew kettle. It’s the hazy IPA. Although this style has been around for a couple of years, some partakers are a bit hazed and confused over what exactly a hazy IPA is.

Thirstly, if you’ve been frantically searching the Fresh Choice Nelson fridge for hazy beers and only found a few, then you’re in for a thrill… The Hazy IPA can also be called a Cloudy IPA, Juicy IPA, Milkshake IPA or a New England IPA (NEIPA).

The difference between a normal IPA and a hazy is huge. Did I say normal? There’s nothing normal when you’ve got at least eleven different styles of IPA. Bot the clear and the hazy are still very hop forward. But, the hazy style is way less bitter and has extra ingredients of different combinations of oats, wheat, lactose and fruit puree which gives it both the thick, juicy mouthfeel and the haze. Being low in bitterness is the game-changer as it has the potential to appeal to the ‘no-I-don’t-like-beer’ proponents.

Perhaps the best example of a hazy is Garage Project’s, Trillium X. It’s ranked 48th on Ratebeer’s top-ranked Hazy beers. That’s a helluva achievement since there are currently over 7000 craft breweries in America where the style was first invented. It pours a beautiful hazy apricot colour with slippery notes of stone fruits and pink marshmallows on the tongue. It’s a beautiful thing. Be sure to roll the can on the bar before opening to redistribute all the murky goodness.

Another epic hazy is ‘Epic Hayz’ from Epic Brewing. It’s got orange-yellowy cloudiness with the aroma and flavour of passionfruit and peaches, a wheat-zing and is crazy easy to drink.

Finally, ‘Hazed and Confused’ is Emmerson’s take on a cloudy IPA. It’s a luscious storm of tropical fruit flavours that leave you in no doubt about the hazy beer craze.

Laze on down to Fresh Choice Nelson where the beer choice is… Chooiicce!